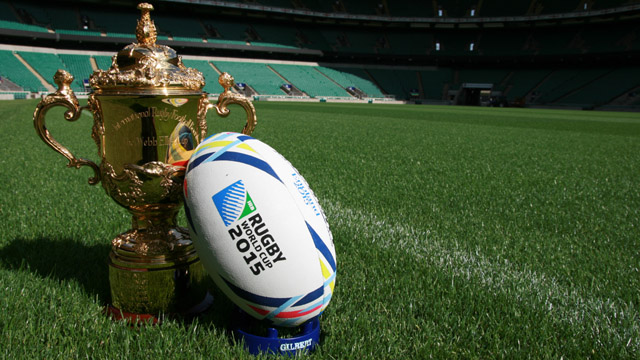 Obviously at the highest profile event in World Rugby there won’t be many players that are completely unknown and without a single warm up game being played or any coaches naming their final squads for the tournament selecting any sort of team from the players who may feature would be lunacy, so here goes –
1. Keita Inagaki – the Japanese loose head is a Melbourne Rebels player and is very mobile for a man tipping the scales at over 18 stone, he may well bag a few tries in Pool B
2. Nicholas Klappenbach – Uruguay’s Captain is a qualified doctor and while they may struggle as a collective he should be a stand out player, he might be wearing 2 but he plays like a 7
3. Titi Lamositele – A former High School Football star the 20 year old from Samoan heritage plays for Saracens and is the youngest player to be capped by the Eagles.
4. Nico Esterhuyse – Namibia’s veteran lock forward stands 6 feet 9 inches tall, the stuff of nightmares for New Zealand, Georgia, Argentina and Tonga’s hookers who will have to avoid him at lineout time
5. Leone Nakarawa – Everybody who’s seen Glasgow Warriors play knows in the last 2 seasons knows what he can do but that doesn’t make his 7’s handling any less spectacular or stoppable, expect no look passes and confused defenders
6. John Moonlight – the Canadian 7’s Captain has scored 3 tries in just 13 starts for the 15 a side team, expect dynamism and pace to frighten most opposing forwards
7. Renaldo Bothma – he’s played 5 games for Namibia and scored 5 tries. The South African born has scored 22 tries in 90 games for the Steval Pumas, he’s a try machine.
8. Danny Barrett – He’s the USA 7’s Captain and he’s relentless, prominent in the Eagles win at World Rugby 7’s series in Twickenham this year he’s got speed to go with the stamina.
9. Sam Hidalgo-Clyne – This one’s in more in hope than belief, he’s been the best scrum half in Scotland all year but Greig Laidlaw is the current number 9 and as skipper he’ll be hard to depose.
10. Ben Volavola – The Waratahs player might not play at 10 for Fiji but his pace and dancing feet will open up space or the destructive outside backs they’ve got wherever they fit him in.
11. Zack Test – The Loughborough University student and USA 7’s specialist will be tricky for defenders to stop as he is 6 feet 3 inches tall and he’s fast enough to have scored 108 tries in 46 7’s appearances
12. Kotaro Matsushima – Born in South Africa he was the first player to join the Sharks academy before moving to Suntory Goliath and then onto the Waratahs. The diminutive 22 year old has got plenty of air miles in the bank.
13. JC Greyling – Namibia’s 24 year old tackles like a 6 and runs like an 8, there’ll be a few bruised bodies in Pool C when the former Valke Currie Cup player is finished with them.
14. Tamaz Mtchedlidze – There’s nothing original about a 6 foot 5 inch, 17 stone Georgian, unless he’s playing on the wing. He plays in Pro D2 in France for SU Agen and everyone in Pool C has been warned.

15. Catalin Fercu – Romania’s Captain has been a crucial member of Saracen’s LV Cup team and their ‘A’ team Saracens Storm this season, he missed the last RWC in New Zealand because he didn’t fancy the long flight to New Zealand (yes, really) so he’s got plenty to make up for and his 143 points in 78 matches suggest he’s more than capable of doing that.

An honourable mention should go to Scottish flanker John Hardie, the 27 year old is so surreptitious that nobody in Scotland has actually seen him play regional rugby, having left the Super Rugby Champions the Highlanders to pursue his dream of playing for Scotland (no laughing at the back) and as yet the S.R.U haven’t decided whether he’ll be an Edinburgh player or a Glasgow Warrior in the coming season.

Japan and Samoa begin the defence of their respective World Rugby Pacific Nations Cup conference titles (snappy name, eh?) in a week’s time and while this is probably the most confusing competition in professional sports (it changes format on a seemingly annual basis and occasionally the teams competing in it differ too) the fact that three of the main protagonists will clash to qualify from Rugby World Cup Pool B in about 10 weeks makes this a fascinating tournament. Without trying to explain how the World Rugby Pacific Nations Cup will be won or lost, or trying to decipher why last season teams competed in intra-conference fixtures while this year all fixtures are inter-conference (did I mention it was confusing?) now would be an apt time to consider how the USA, Japan and Samoa may fare at the RWC in September and hopefully into mid October if they progress to the RWC knock out stages.
Pool A at the RWC has been awarded the hyperbolic moniker “Pool of death” by those who claim to know these things because there is a real chance that one of the team’s who appeared in the 3rd and 4th place play off at 2011’s RWC will fail to progress to the Quarter Final stages as a result this Pool will be scrutinised in microscopic detail over the coming months, however Pool B is far more intriguing. Samoa, Japan and the USA not only all finished in the top 2 of their PNC conference’s (a tournament where an average of 6.17 tries were scored each game) last year but all 3 sides are separated by just 7 places and just 8 ranking points in the current World Rugby rankings (fellow Pool B competitors Scotland are also ranked between Samoa and the USA but I have a bad feeling about their chances of progressing to the Quarter Finals given their 2015 6 Nations embarrassment).

USA are able to call on players who have been more than catching the eye in the Aviva Premiership in recent seasons not least Samu Manoa (who has just left Northampton to join Toulon and win a boat load of trophies) and Saracens utility back Chris Wyles (who has won his fair share of trophies during his time playing for the North London club). Manoa was called “perhaps the finest number 8 playing the game in the northern hemisphere” by ESPN Scrum and he amassed 130 points in his 122 games for the Saints, the rather unfortunate thing about ESPN’s description is he’s more likely to feature at Lock for the USA with the hirsute USA 7’s star Danny Barrett battling it out for a starting spot at 8 with Cardiff Blues new signing Cameron Dolan. Barrett is not the only member of the 7’s side represented in the Eagles squad, Fijian born Andrew Duratolo, former Saracens (now London Welsh) Centre Thretton Palamo and Zach Test who is uncapped by the 15’s side were all part of the USA team who recorded their first tournament victory on the World Rugby 7’s circuit in May, at Twickenham where the Eagles will hope to feature in the Quarter Finals (probably against the hosts England). The success of the 7’s side illustrates how dangerous the Eagles will be with ball in hand (Takudzwa Ngwenya didn’t feature for the 7’s side but he’s been one of the most electric wingers in European rugby for 8 years and Blaine Scully was the top try scorer in last year’s PNC with an impressive 5 in 2 games) so their progression through the tournament will largely depend on how successful they are at securing possession with which to launch their open field runners, the back row will be vital in this endeavour and when Samu Manoa has to play in the tight five to allow Barrett or Dolan be joined in the back row by talismanic captain Todd Clever and the 29 times capped Scott Lavalla who plays in Paris for Stade Francais you know the Eagles will compete effectively at the breakdown. The main area for concern for the Eagles will be the front row at scrum time, but with so many differing interpretations available to officials and different officials looking for different offences at the scrum that will be an area of concern for everybody come September.
Samoa are ranked by World Rugby and last season won the Pacific Island conference of the Pacific Nations Cup by virtue of their first win over Fiji in 16 years. However Samoa’s players are amongst those who have been subject to pressure from their clubs regarding International availability. In May this year Daniel Leo retired from International rugby and claimed that up to 13 of his fellow Samoan teammate’s may be feeling similar pressure to place their club career ahead of their International aspirations in order to receive new contract’s. Stade Toulousain’s Fabien Pelous expressed “surprise” that their 34 year old prop Census Johnston played for Samoa against the All Blacks in the historic Test match this week as they understood that Johnston had retired from International rugby in April, so off the field things have not been simple for Samoa which is a shame when they potentially have so much talent from which to select their RWC squad. Against New Zealand they started a front row who were just 7lbs away from a collective mass of 60 stone, Johnston alone accounted for over 20 of those stones so his inclusion would solidify their scrum. Samoa’s 2 main areas of weakness are at Fly Half where they have traditionally struggled for an accurate kicker from hand and team discipline, they lost the Test against the All Blacks having scored the same number of tries as them, with New Zealand converting 6 penalty kicks compared to the 3 by Samoa.

Japan won the Asia/Pacific conference of the 2014 World Rugby Pacific Nations Cup and are ranked 3 places higher than the USA in World Rugby’s current rankings and whilst they will probably have the most experienced squad of the so called minnows in Pool B they have only ever won 1 RWC game and that was back in 1991. It’s obviously difficult to write off the reigning PNC champions but the emergence of Japan’s “Top League” as a go to destination for foreign rugby players who are attracted by the relatively short season and the inflated salaries which are on offer must be a detrimental factor for rugby union’s development in the land of the rising sun. Just 6 of Eddie Jones’ 37 man RWC squad currently play outside Japan and not all of them regularly feature for their respective Super Rugby franchises. Again a lack of a quality Fly Half will surely be a problem for Japan but their biggest stumbling block may be their style of play, they like to play high tempo attacking rugby but so do the other teams in Pool B and 4 of them may just do it better.